A rapid and pragmatic Response to the Threat of Covid-19 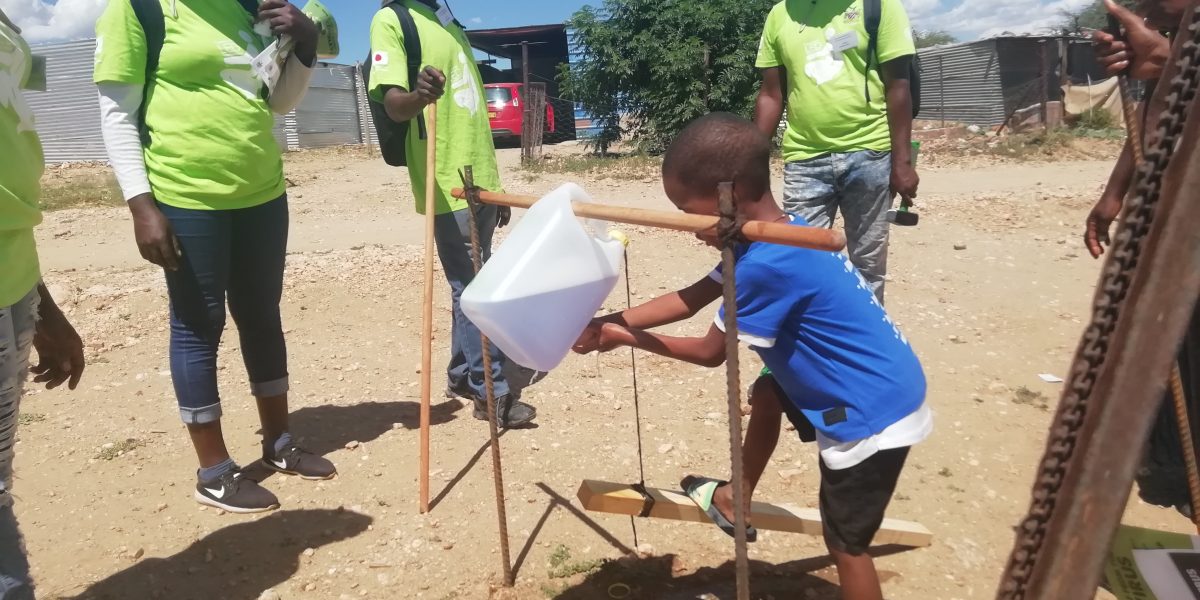 Namibia recorded its first cases of Covid-19 on the 13th of March 2020. Given the havoc wreaked by this disease elsewhere, Namibians needed to act fast to protect themselves from this virus. The densely populated informal settlements around Windhoek and the other major towns were prioritised for action, as people living here have little access to sanitation and cannot practically implement social distancing.

One of the primary recommendations by the World Health Organisation (WHO) to reduce the spread of Covid-19 is to wash your hands frequently with soap, but this is all but impossible for people living far from the nearest municipal tap. A practical and cost-effective solution to this problem is to install Tippy Taps near homes and in public places (e.g. schools, markets) throughout the informal settlements. A Tippy Tap is a basic structure that holds a 2-litre water container in such a way that one can tip it up by stepping on a connected plank to ‘turn on’ a flow of soapy water from the container over your hands.

Within a few days of the first Namibian cases, the Debmarine-Namdeb Foundation supported a rapid response to the outbreak and contributed to a multi stakeholder initiative that would install 20,000 Tippy Taps in Windhoek’s informal settlements. The project is being implemented by the Namibian Chamber of Environment (NCE) and Development Workshop Namibia (DWN), and at the time of writing, teams of local volunteers operating under the supervision of DWN had installed over 17,000 Tippy Taps, reaching over 51,000 households (average of three per tap) in Windhoek’s informal settlements.

The Debmarine Namdeb Foundation fully funded a similar initiative in the towns of Lüderitz and Aus. The aim of the project was to install 1,500 Tippy Taps in both towns (1,300 in Lüderitz and 200 in Aus), focusing on households living in parts of the towns that had minimal access to running water. Two DWN team leaders were dispatched to Lüderitz on 11 May 2020 to install the Tippy Taps. With full support from the local Constituency Councillor and Lüderitz Town Council Task Force, 16 volunteers where selected and trained from the local community

Besides carrying the hardware required to construct Tippy Taps, the teams were equipped with pamphlets to distribute as widely as possible. These pamphlets provide instructions on how to build a Tippy Tap in six Namibian languages (including Khoekhoegowab, the main language in these towns) and information on Covid-19 and the importance of sanitation to prevent it. Employing local volunteers has the added benefit of creating local ownership of the Tippy Tap project, while the do-it-yourself instruction pamphlets encouraged households that did not receive their own Tippy Tap to build one for themselves. The team was motivated by the clear gratitude shown by beneficiary households and their observations of people frequently using the Taps they had set up while en-route to build more in other locations.

Besides providing Tippy Taps for households, the volunteer teams built Tippy Taps in public places where the threat of Covid-19 spreading is highest. These included the hospital and several clinics, the police station, the street vendors’ trading spots, and schools. Five schools received 10 Tippy Taps each, which greatly aided their preparations for reopening after the lockdown was lifted. The target of 1,500 Tippy Taps in Lüderitz and Aus was met on 4June 2020, just a few weeks after project initiation. The Lüderitz Town Chief Executive Officer expressed his gratitude for the volunteers’ hard work during this time by awarding them certificates of appreciation. In turn, the DWN team are especially grateful to the Namdeb-Debmarine Foundation for making this project possible.