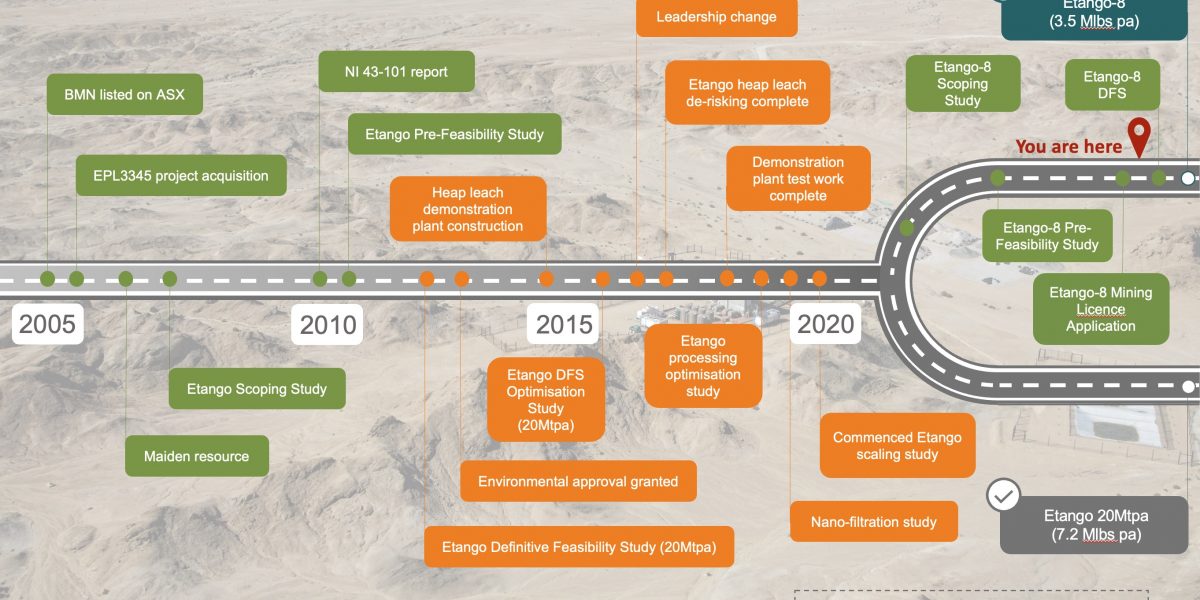 Bannerman Mining Resources has boosted Namibia’s strong uranium sector credentials with the lodgement of a Mining Licence Application for the proposed Etango-8 uranium mine with the Ministry of Mines and Energy.

This is a significant step towards bringing Etango-8 into production and is a major milestone in the company’s long history in Namibia, dating back to the 2006 grant of EPL 3345 to explore for nuclear fuels near Goanikontes in the Erongo Region. Over that time Bannerman has proven itself to be a responsible player in the uranium sector and an outstanding corporate citizen, best known for its Early Learner Assistance Scheme that has benefitted 3,300 Namibian learners across the nation.

The ML application is the culmination of extensive technical and economic evaluation of the Etango Uranium Project. In particular, this step validates its 2020 decision to focus on a throughput of 8 million tonnes per annum, the namesake capacity for “Etango-8”. Until then, Bannerman devoted its energy towards a larger scale uranium project with throughput of 20 million tonnes per annum – now referred to as “Etango-20”. The extensive feasibility work that precedes Etango-8 includes a Definitive Feasibility Study (2012) and a DFS Optimisation Study (2015).

After completion of a world-standard, peer-reviewed Environmental and Social Impact Assessment and Management Plan, Bannerman was granted an Environmental Clearance Certificate for the proposed mine and associated linear infrastructure. The company went on to commission the Etango Heap Leach Demonstration Plant, an industrial scale plant to demonstrate the viability of its heap leach processing route and assumptions. The results of the test work strongly supported the DFS metallurgical parameters and allowed Bannerman to do additional test work to improve the Etango flowsheet.

In 2019 Bannerman started the evaluation of project scaling and scope opportunities under various development parameters and market conditions as an alternative streamlined development model to the Etango-20 development route. Developing the world-class Etango Project at an initial 8Mtpa throughput offers significant advantages. It sharply reduces the upfront capital and funding hurdles and allows the company to get into production sooner at a lower threshold uranium incentive price than Etango-20. Once in production at the initial 8 million tonne per annum throughput, Bannerman may then evaluate expanding the Etango production to the originally envisaged scale.

The impact of the Etango-8 uranium project on the wider Namibian community is significant. During construction there will be 1,000 people on site; once in operation it will create 760 well paid direct Namibian jobs and a multiplier effect of up to 5,000 indirect jobs. Etango-8 forecasts an average annual output of 3.5Mlbs U3O8, enough uranium to power 7-8 conventional nuclear reactors – an output that would reduce an astonishing 64 million tonnes of carbon emissions annually, compared with equivalent coal-fired power.

Over Etango-8’s initial 15-year mine life, Bannerman is forecast to contribute approximately N$1.3 billion in royalties and N$ 4.5 billion in company tax to the Namibian government. As the 15-year mining reserve is only a fraction of total uranium resources at Etango, the mine may well continue for many further years.

Bannerman is looking forward to the completion of the Etango-8 DFS during the December quarter and working with the Ministry of Mines and Energy towards grant of the Etango ML.

Bannerman will be in attendance at the 2022 Mining Expo & Conference.