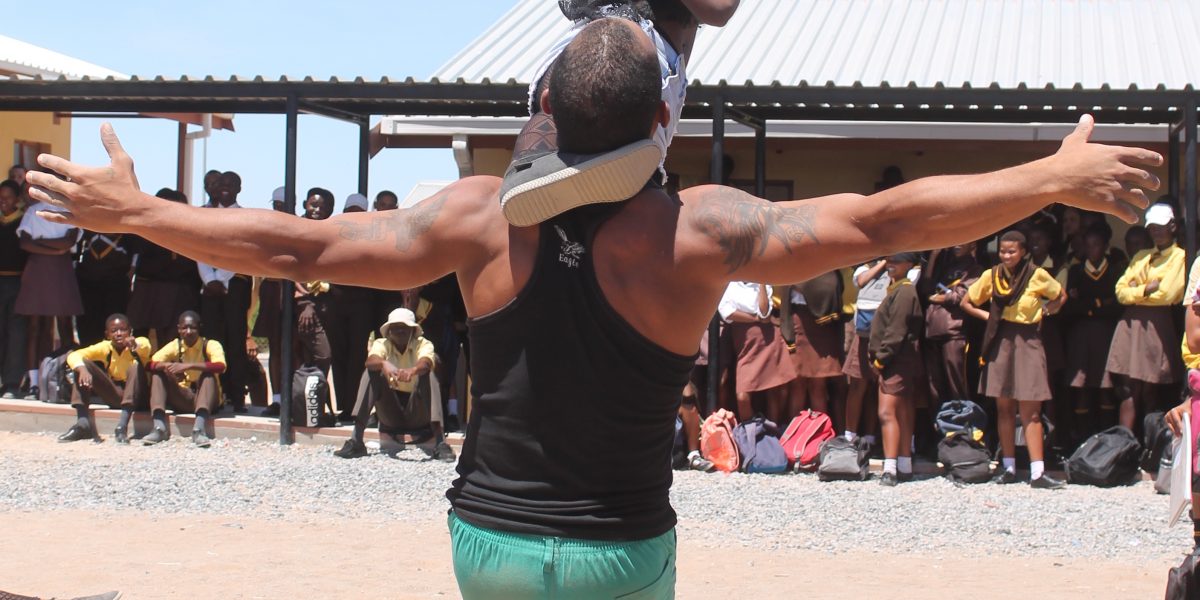 Operating from the capital Windhoek, OYO (Ombetja Yehinga Organisation) is a dance troupe that uses the arts to bring powerful messaging on social problems to the youth. Through role play and dance routines, OYO is able to communicate messages in a impactful manner, influencing young people to make the correct moral decisions when confronted with life’s challenging situations.

The ||Kharas region is home to approximately 89,000 people, with an alarmingly high youth unemployment rate of 44.7% according to the 2018 Namibian Labour Force Survey. The high unemployment is one of the many social ills afflicting the youth, which also include poor parental support, a rising number of teenage pregnancies, gender-based violence (GBV) and alcoholism.

In addition, given that major support organisations such as PEPFAR and the Global fund are absent in this part of Namibia, who are the leading organisations on sexual and reproductive health programmes, there is limited education and support for young people in these areas.

In recognition of this gap, the Debamraine/ Namdeb Foundation identified and sponsored the Ombetja Yehinga Organisation (OYO) to assist the youth in the ||Kharas region in dealing with these social challenges, while encouraging them to complete their schooling.

OYO ran its programme from January to March 2020, in which it organised teacher exchanges and a tour of its dance troupe to 13 schools which reached 4,239 learners. The presentations also included training workshops for 67 girls and boys respectively aimed at creating ambassadors for change.

Unfortunately, the campaign came to an abrupt halt in mid-March, due to the first initial cases of COVID-19 recorded in Namibia. For many Namibians, in particular for young people, the situation was confusing which involved a flurry of information on social media platforms and rounds of fake news. It was thus important to find effective and efficient ways to reach young people fast.

OYO immediately involved its dance troupe to create short clips on COVID-19 preventative measures, for example washing of hands and social distancing. However, with the lockdown and closure of the schools, two additional threats were identified, namely increased gender-based violence and teenage pregnancy.

Within a few days, the Debmarine-Namdeb Foundation agreed for OYO to produce two clips on gender–based violence (GBV) and seven clips on teenage pregnancy. The clips were shared on OYO’s social media and broadcasted on NBC and One Africa TV. In addition, further awareness was facilitated by trainers who engaged with remote communities in the ||Kharas region through door-to-door visits.  The clips are still being broadcasted on national TV.

In parallel, OYO expanded its counselling line (+264 81 420 3015), offering support to young people it cannot reach directly. Since many learners (except grade 11 and 12) have not yet returned to school, this is a service that is very much needed among the youth.

The Namdeb Debmarine foundation is proud to partner with such a dynamic organisation, that uses innovative measures to interact with and provide support for Namibia’s youth.

For more information, please visit their website on https://www.ombetja.org/

Contributed by the Debmarine-Namdeb Foundation