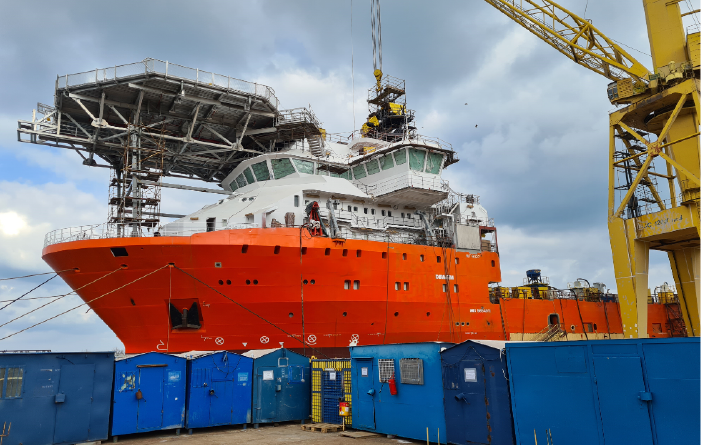 The construction of the Debmarine Namibia’s new recovery vessel is nearing completion and set for delivery early next month. A significant milestone was achieved when the main engines of the Additional Mining Vessel #3 (AMV3) were started successfully for the first-time last month.

The vessel is scheduled to be completed in July, and will soon embark on a month-long maiden voyage from Romania to the Port of Cape Town, where it will be fitted with recovery equipment.

The recovery equipment is being built in parallel with the vessel construction, and is being fast tracked to align to the target delivery of the vessel.

The construction of the new vessel and steel cutting began at Damen’s Mangalia yard in May 2019. This massive N$7 billion investment in the new recovery vessel is a clear indication of business and consumer confidence in the glittering diamond industry. Steel cutting commenced in May 2019 in at the Damen Shipyard in Mangalia, while steel fabrication works and manufacturing of components of the recovery system, crawler and treatment plant were made in Walvis Bay, Cape Town and Johannesburg.

The AMV3 is the sixth vessel of the Debmarine Namibia fleet. Debmarine Namibia currently owns, manages and maintains six diamond vessels, operating in Namibia’s Atlantic 1 mining licence area namely, MV Mafuta, MV Grand Banks, MV Debmar Pacific, MV Debmar Atlantic and MV!Gariep and the SS Nujoma, which is an exploration and sampling vessel. The company is the largest miner of diamonds in Namibia, which constitutes approximately 70% to the country’s diamond production profile, and is one of the single largest contributors to the national treasury.

The construction of the AMV3 was made possible by co-funding from five banks, namely; Nedbank, RMB, Standard Bank, Windhoek and ABSA. Debmarine Namibia covered 25% of total project cost.