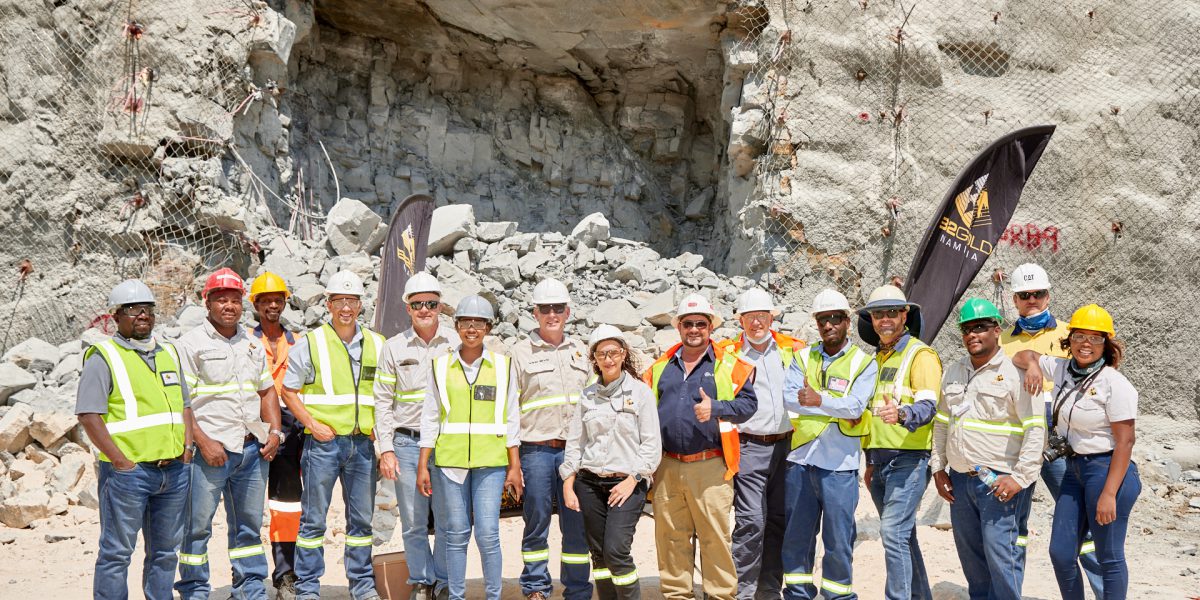 The development of the Wolfshag Underground Project at Otjikoto Mine continues to progress on schedule.  On Friday 30 October, just after 1 pm, the first blast was taken at the portal to the Wolfshag Underground Mine, turning a new chapter in the mining success story of B2Gold Namibia.  It also heralded introduction of the first underground gold mine in Namibia, promising a significant injection into the Namibian fiscus over the next five years.

The Wolfshag underground mining project was approved by the B2Gold Board in December 2019, following an internal trade-off study between open pit and underground mining.  The development tender issued earlier in 2020, to source the skills of an experienced underground miner for the initial phase of underground mine development, attracted global attention and was eventually awarded to Murray & Roberts Cementation in joint venture with Lewcor Namibia (MRCL).  The total project development cost, including contractor costs, amount to USD 56.5 million (approximately N$847.5 million).

During August and September MRCL mobilised equipment and facilities to Otjikoto Mine. Recruitment of their labour force commenced and new recruits are meshed and accommodated at the onsite contractors’ camp.  The MRCL labour plan requires the appointment of 126 Namibians during the various construction phases of the project, with positions advertised nationwide.  Preference is given to local candidates from the Otjozondjupa region.  Appointees undergo a comprehensive induction and certification process to ensure compliance with strict safety rules and mining legislation related to underground operations.

The first blast taken at the portal to the Wolfshag Underground Mine was preceded by high wall support of the mined-out Otjikoto Phase 2 pit.  Shotcrete cement, cable anchors, roof bolts and wire mesh were installed ensuring safe access for vehicles and personnel entering the underground operation.

The central part of the underground mine will be located 275 metres below surface and accessed via a single 1,300-metre-long decline.  The production phase of the project will commence by January 2022 when lateral development reaches the main ore body.  The ore will be mined with a longhole stoping method at a production rate of 1,100 tonnes per day.

Fresh air will be supplied to the underground workings through a four-metre-wide ventilation raise which is equipped with an emergency escape ladderway. Active dewatering of the underground mine will be done from the surface by means of a large diameter dewatering well.  Installed underground pumping capacity will be more than adequate to deal with any inrush of water into the underground workings.  Systematic ground support with roof bolts and wire mesh will be conducted in all excavations and no personnel will be allowed to work under an unsupported roof. Load, Haul and Dump vehicles (LHDs) will be operated remotely to extract ore from the open stopes. All heavy mining vehicles are fitted with proximity detection systems and will sound an alarm when near to humans.

The underground Mineral Reserve is estimated to contain 210 000 ounces of gold contained in 1.2 million tonnes of ore grading at 5.57g/t gold and will be extracted over a period of four years from January 2022 to August 2025.  During this period, it is expected that the project will realise revenue of USD 403.2 million (approximately N$6.048 billion) at a gold price of USD 1,500 per ounce, with an incremental All-in sustaining cost (ASIC) of USD 609 per ounce.

In addition to returning an estimated USD 16.1 million (N$241.5 million) in royalties and export levies to the government of Namibia over the four-year period, the project will also contribute significantly to the Namibian GDP through corporate taxes, withholding taxes and PAYE.  An estimated 300 – 400 direct and indirect employment opportunities will be created during the present economic downturn, a period that has seen a number of mining operations in Namibia being put on care and maintenance and skilled workers being retrenched.

Over its operating life, high grade ore from the Wolfshag Underground Mine will complement the open pit ore supply at Otjikoto, increasing mill feed grade and economic viability of the entire Otjikoto operation.

Exploration drilling from surface, and in future years from the underground workings, will aim to increase geological confidence to Inferred Resources and will target extensions of the mineralized zone at depth and along strike, all of which may potentially extend B2Gold Namibia’s life of mine.

B2Gold’s Otjikoto Mine is located on commercial farmland, about 2km to the east of the B1 main road between the towns of Otavi and Otjiwarongo, 300km north of Namibia’s capital city of Windhoek.