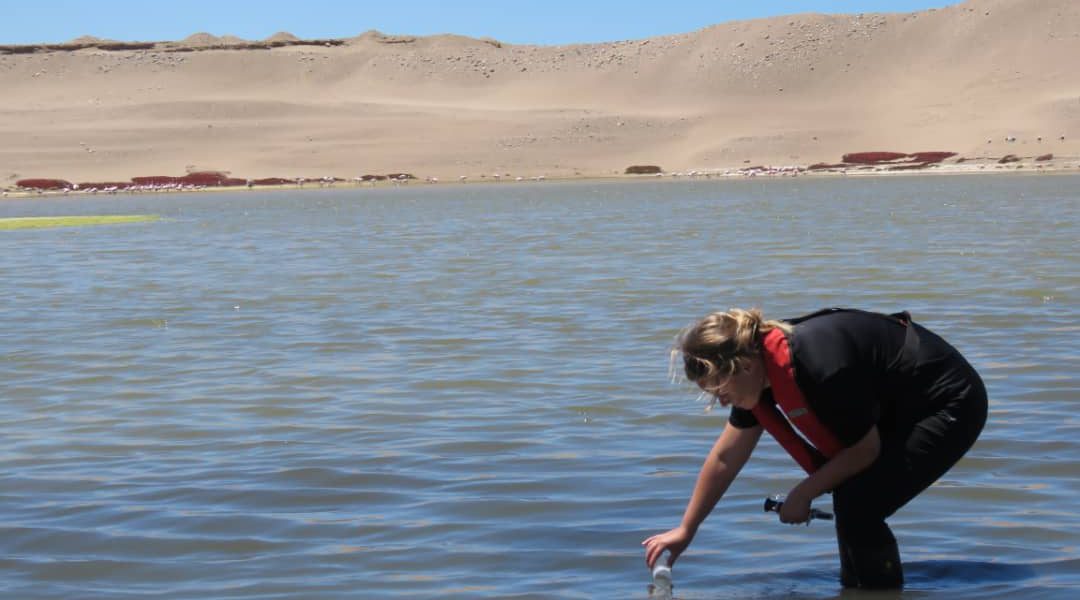 Namdeb is committed to preserving their surrounding environment, through continuously minimizing the carbon footprint of their operations and protecting our natural world.

Liezl Maritz, a Namdeb environmentalist who recently graduated from the University of Cape Town (UCT) with an MSc in Biological Sciences, has always had a passion for the environment and ensuring its preservation for the future. According to Liezl, her experience working for Namdeb’s environmental department helped her identify and understand how the movement of objects impacts a surrounding space, and the relationship between natural and human elements, which motivated her research.

As part of her research, she undertook the first (and only) investigation of the ecological viability of wetland marine ponds created by diamond-mining activities within the Southern Coastal Mines licence area held by Namdeb. Prior to the mining, the coast was covered in a naturally occurring dune hammock system, which disappeared and has been replaced by the man-made marine ponds. Her research study thus aimed to assess whether these ponds could supplement the sparse estuarine and lagoonal systems that exist along this coastal area.

“The mining activity at Namdeb takes place by progressively pushing the coastline out into sea. This enables mining to take place in what was previously a surf zone, in the lee of ‘sea walls’ that hold the sea at bay. In the process, multiple large marine ponds, some as much as one kilometer long, are created along the coast, which are clearly visible on Google Earth,” she said.

When conducting her study, which took place on an area approximately 75 kilometers in length and with 150 pools in total, she assessed the age, physical properties, amount of salt-marsh vegetation, bird species and fish benefitting from each pond. This allowed her to determine whether the ponds serve an important ecological role worth preserving.

“During my solo fishing expeditions, there would always be black-backed jackals nearby, indifferent to my presence, observing and patiently waiting for me to finish my dissections so they [could] collect fish scraps. Regular sightings of the peculiar brown hyena were a constant reminder of the wild nature of the coast. This experience has taught me to make time to reflect and appreciate the small moments in life.”

The findings of her research show that the rich waterbird fauna found in the area is on par with other regions classified as Important Bird and Biodiversity Areas. Thirty-six different bird species were recorded during her study, and the ponds provide an attractive alternative habitat for waterbirds to nest, forage and roost. In the end, the final verdict was positive. Her research revealed that the pools do in fact support and attract biodiversity.

These findings will indeed add value to the Company by contributing to the biodiversity conservation efforts in the Southern Coastal Mines area and Namibia as a whole, as well as create opportunities for the fields of restoration, ecology and mining environmental management as part of Namdeb’s commitment to protecting the natural world.